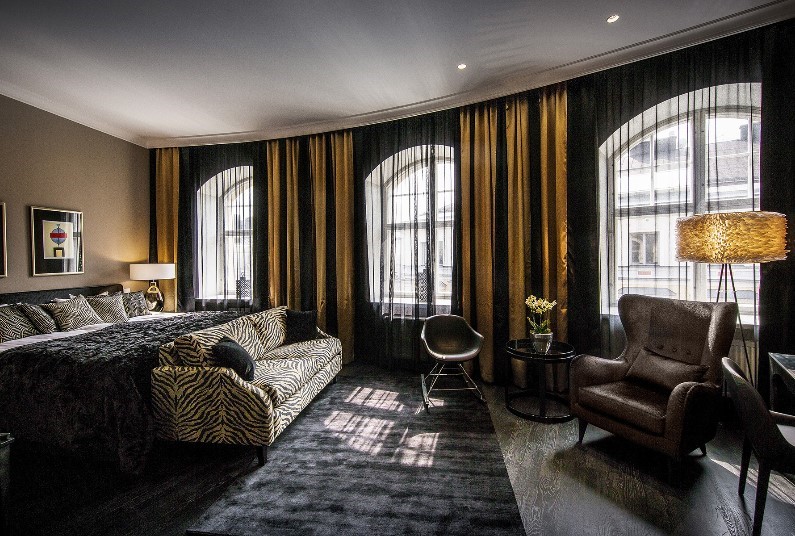 The 5 star Lilla Roberts is housed in a charming 20th century building with close historical ties to the city. Designed in 1909 by one of Finland's top architects, the building was originally the head office for the city's energy company. Subsequently it has been converted into the smart and very welcoming hotel that it is today, retaining the grandeur and features of the original structure.

Located on a quiet street in the Kaartinkaupunki district, the hotel design is retro art deco, both in the common areas and in the rooms. The lobby is particularly interesting with its shiny, lobby bar, monochrome colour scheme and large windows letting in floods of light. Black dominates everywhere but the feeling is a long way from sombre.

A 10 minute walk from the hotel brings you to Helsinki’s central shopping area with its boutiques, restaurants and cafes. A 15 minute taxi ride will deliver you to the South Harbour from where cruises depart for Stockholm, Tallinn and the islands around the mainland. A tram stop is a stone’s throw away.

An excellent base for Helsinki and for a touring holiday in Finland.

Enquire about this holiday

Please quote "Lilla Roberts Hotel 1st Nov 2021"
01903 766 966
sales@lancingtravel.co.uk
Prices are per person (unless stated otherwise). Prices are not live and are subject to change at any time. Where applicable prices include any advertised discounts. Holidays are subject to availability and tour operator/supplier’s booking conditions apply. Offers can be changed or withdrawn without notice. Latest price/availability and operator details will be confirmed at time of enquiry – ask for more information.